Erdoğan accelerates the Islamization of the army before elections 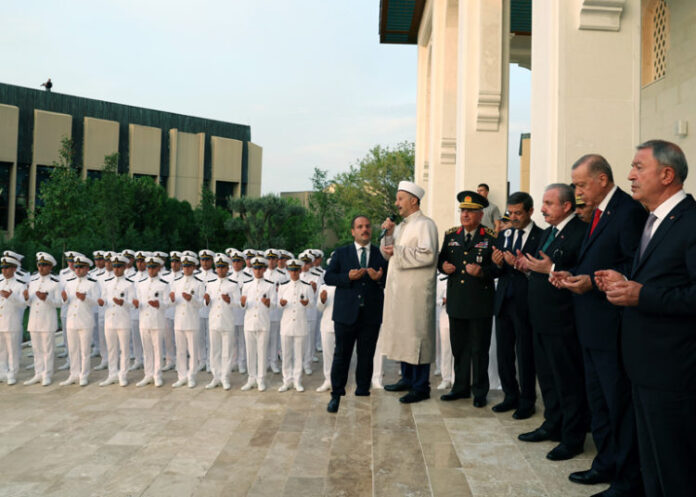 Turkish President Recep Tayyip Erdoğan last week inaugurated the Naval Academy Mosque on Victory Day, a holiday celebrating the Turkish Armed Forces (TSK), which was once known as the toughest guardian of secularism in the country. Stating that mosques will be quickly completed at other military schools, the president said that throughout history Turkish soldiers won all their victories with hearts full of faith and “took a sledgehammer” to the heads of those who coveted their homeland. In his speech full of intense religious arguments, Erdoğan described the severing of the army’s ties with religion as a betrayal of the nation and claimed that that period is now over, referring to a time of military tutelage during which the generals were influential in ruling the country.

Undoubtedly, the mosque opening, which did not require the participation of the president or even an official ceremony, has symbolic value for Erdoğan and his Islamist supporters. Not only taking revenge on the military, which had ousted Islamist prime minister Necmettin Erbakan in 1997 and imposed an ultra-strict secular rule that could be described as anti-religious by devout Muslims, Erdoğan also was conveying a subliminal message to his grassroots that there is still a risk of losing all that’s been achieved. A common method Erdoğan uses to bring religious elements to the fore in the military is to present Ali Erbaş, head of the Religious Affairs Directorate (Diyanet), at official military ceremonies. Erbaş not only makes enthusiastic speeches but also blesses the army. When the opposition reacts to this situation because it is an anti-secular practice and the government is using religion for politics, the ruling party elites emphasize that the opposition is not uncomfortable with the head of Religious Affairs but with the religion itself. This argument certainly has a lot of support from the party base.

On August 23 Ali Erbaş attended the graduation ceremony of the Gendarmerie and Coast Guard Academy along with Erdoğan and recited a lengthy prayer for the graduates. At the same ceremony, Interior Minister Süleyman Soylu advised the graduates to perform ablutions before going on duty.

On February 5 Erbaş visited the gendarmerie commando brigade in Şırnak for a religious ceremony and held a prayer session for the gendarmes there as well, something that would have been unimaginable 10 years ago, when the generals did not allow even the headscarved mothers of conscripts to enter garrisons let alone the head of the Diyanet.

Adnan Tanriverdi is another person with whom Erdoğan is allied for transforming the army into a structure that  will not cause him any trouble. Tanrıverdi, a retired general and former chief military advisor to President Erdoğan, runs the private military contractor SADAT, a paramilitary unit loyal to Erdoğan. He had to leave his position following a Nordic Monitor report that he had been working to pave the way for the long-awaited Mahdi (prophesied redeemer of Islam), for whom the entire Muslim world is waiting

Tanriverdi provided profiling lists that included opponents of Erdoğan in the military. SADAT also took part in the training and management of jihadist fighters under Turkish control in Syria. It was also revealed that SADAT transported jihadists from Syria to Libya in cooperation with Turkish Intelligence. Undoubtedly, no one more than Hulusi Akar, the former chief of general staff and current defense minister, has served in bringing the military to the current submissive position Erdoğan desires.

After a controversial coup attempt on July 15, 2016, Akar played a leading role in the purge of thousands of pro-NATO and pro-West officers from the army. Generals who opposed a military operation in Syria were either imprisoned or forced to retire.

In the years following the coup attempt, Akar also managed to dismiss pro-secular officers who collaborated with Erdoğan between 2014 and 2016  in ousting officers alleged to have ties to the Gülen movement, a fierce critic of Erdoğan. According to updated figures, 24,339 members of the Turkish Armed Forces have been dismissed since 2016. The official account states that 8,651 military members took part in the coup, corresponding to only 1.5 percent of the TSK. Of those 1,761 were conscripts and 1,214 were military cadets. Given the fact that some 150 generals and thousands of lower-ranking officers were sentenced on coup charges, military experts find it odd that such an insignificant number of troops took part in the coup attempt.

The government also changed the procedure by which staff officers are selected, which it saw as a threat. A new examination system has been introduced in which the government decides who can be a staff officer.

The Erdoğan government also shut down military schools due to alleged involvement in the coup attempt only 10 days after the incident. The National Defense University was founded with a government decree on July 25, 2016 as a replacement.

Thus, that paved the way for religious high school (imam-hatip) graduates to become officers, unlike in the past. Erdoğan, who himself is an imam-hatip graduate, provided the opportunity for Islamist youths to be recruited into the army more quickly.

In the history of modern Turkey, the army carried out bloody coups and forced politicians out of office. It is no secret that Erdoğan is trying to design the military as a power that protects his regime. He expects his supporters to see the transformation in the army, which they used to describe as the “enemy of the religion.”

Finally, Erdoğan needs the army for a cross-border military operation against Kurds in Syria and for escalating tensions with Greece in order to create a wave of neo-nationalism at home before elections in 2023. The military now opposes neither his Islamist agenda nor his political opportunism.