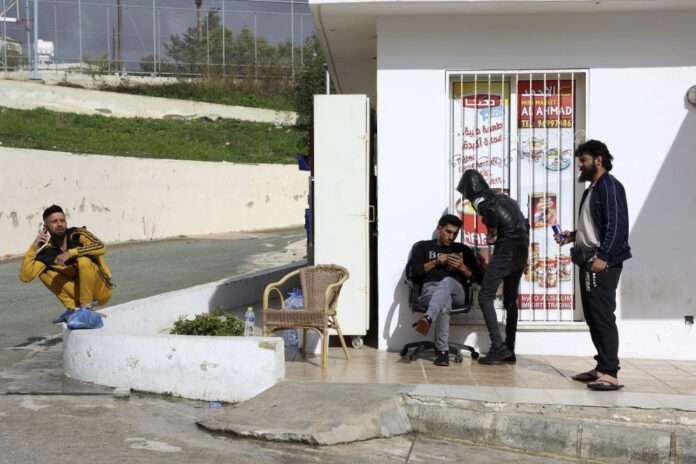 The Republic of Cyprus, 36% of which is illegally occupied by Turkey, is increasingly struggling with a massive wave of illegal migration from Turkey, the Middle East and Africa.

Cyprus now has the highest number of asylum applications per capita of any EU country. Nearly 5% of the island population, according to the country’s officials, is now made up of asylum seekers.

The Cypriot government says that Turkey is orchestrating this illegal immigration crisis, as most migrants coming to Cyprus travel from Turkey. They reportedly fly from Istanbul or Ankara to the Turkish-occupied north of Cyprus, are then smuggled to the free, southern part of the Republic of Cyprus, and from there, under EU law, can apply for asylum.

Since 2018, Cyprus has experienced a large increase in the number of people illegally arriving in the country and then applying for asylum.

In May 2021, Cyprus notified the EU that it could not accept any more irregular migrants. Interior Minister Nicos Nouris said that with migrant reception centers already overcrowded, Cyprus was now in a “state of emergency.”

A few months later, in November 2021, the government of Cyprus said that this illegal immigrant crisis was creating “significant demographic change”, “ghettoisation in urban areas” and “acute socio-economic effects”.

In February 2022, the EU agreed to “help Cyprus manage record migrant influx.” The European Border and Coast Guard Agency (Frontex) revealed in June that between January and April 2022, the number of migrants arriving in Cyprus increased by 119% compared to the same period last year.

Another Frontex report issued in June noted that in 2022, the number of illegal crossings in Cyprus had increased significantly compared to 2021 — by 213%.

On September 11 of this year, the EU recognized the instrumentalization or “weaponization” of illegal migration by Turkey through the “Green Line” that divides the free and occupied parts of the Republic of Cyprus, according to the country’s interior ministry.

“The average number of illegal immigrants entering the non-occupied territory of the Republic of Cyprus is 1000 – 1500 persons per month. They all illegally cross the green line on the UN buffer zone, coming mostly from Turkey, through the occupied areas of Cyprus.

“Unfortunately, illegal migration is turning out to be a severe problem not only for the EU, but especially for Cyprus, the EU Member state that is receiving the highest number of illegal migrants per capita for the 5th consecutive year.

“Having in mind that migrants are been instrumentalized by third countries like Turkey, we call for the EU to oblige Turkey to respect and fulfill her obligations deriving from the EU-Turkey statement of 2016, towards all Member states including the Republic of Cyprus.

“At the same time, the EU Commission shall proceed to central agreements with third countries on the field of returns, so the illegal migrants can be effectively and quickly returned to their country of origin. Illegal migration is a matter of collective responsibility and not on a single member state to handle it. Having said that, the Republic of Cyprus is grateful to the European Commission for the support and assistance provided until today in our effort to tackle illegal migration.”

In 1974, Turkey invaded the Republic of Cyprus and forcibly displaced the indigenous Greek Cypriots from the island’s north, in a violent ethnic cleansing campaign accompanied by murders, rapes, forced disappearances and other atrocities.

Since then, Turkey has implemented policies meant to erase the Hellenic identity and civilization of occupied northern Cyprus. As a result, the occupied area has been mostly “Turkified” by the influx of illegal settlers from Turkey and around 40,000 Turkish Army soldiers illegally deployed in the country. The original names of geographical locations such as towns and villages have been illegally Turkified. The Greek and other non-Muslim cultural heritage of the occupied area has largely been subjected to systematic annihilation. The capital of the Republic of Cyprus, Nicosia, which is 35% occupied by Turkey, is also the last divided capital of Europe.

Turkey now seems to have its eyes on the free area of Cyprus, upon which it is forcing demographic alteration – through mass illegal immigration.

The village of Chlorakas, for instance, is experiencing an influx of migrants, who make up one-quarter of its residents.

The increased number of migrants attempting to reach Cyprus has raised tensions between Cypriot government authorities and the Turkish regime occupying the north, according to one report from February 22, 2022.

“‘We have a demographic problem,’ Chlorakas Mayor Nicholas Liasides pointed out in this regard, as reported by Euractiv.

“Authorities in Cyprus are attempting to find new ways in order to prevent an influx in the number of migrants and manage the current situation.

“In this regard, recently, the country’s Ministry of the Interior stressed that the repatriation of migrants who have had their applications for international protection rejected is essential to facilitate overcrowding and reduce violence at migrant reception camps….

“Authorities in Cyprus have stressed that the increased number of migrants pushes the country’s small island’s capacity out of its limits.”

The population of the Republic of Cyprus is approximately 1.2 million. The falling birth rates of Cypriot citizens makes the problem more pressing. According to a July 2022 report in the Cypriot media:

“The government is understandably concerned about Cyprus’ birth rate, which has been falling every year since the 1983 peak of 2.41 per woman. According to UN data on World Population Prospects, this year it will stand at 1.3, a projected fall of 0.61 per cent on the previous year. At a discussion at the legislature last year, deputies expressed serious concern about 1.32 births per woman for 2019, but it is now even lower.

“These figures are well below the population replacement rate and are a bad sign for the country’s future.”

Cyprus is “flooded with migrants,” said Costas Constantinou, Cypriot Interior Ministry director general, on July 5. “Our country’s capacity to host migrants has long been surpassed. We are overflowing.” Many migrants arriving in Cyprus, he added, end up taking part in illegal activities run by organized crime.

Constantinou noted that the country received over 13,000 asylum applications in 2021, whereas only 10,700 new births were registered.

“This year, the situation is the same. We had 4,250 births so far, as opposed to 12,000 migrant arrivals. This is not happening anywhere else in the European Union,” Constantinou said.

“In February, Fabrice Leggeri, the head of the EU border agency Frontex, said that Cyprus was facing an ‘extraordinary challenge’ following a visit to a refugee camp there. He added that the country, therefore, needed extraordinary support, having seen the overcrowded and unsanitary conditions at the camps.”

More financial support or migrant housing centers are not the solution to the illegal immigration crisis in Cyprus. The unending number of illegal migrants are apparently intended to outnumber and replace the indigenous Cypriots. Cyprus suffers from both illegal Turkish occupation and the mass illegal migration.

What the Republic of Cyprus appears to need is an end to the illegal Turkish military occupation and an end to the EU’s appeasement of Turkey.

“I strongly believe that illegal immigration is the biggest issue the Republic of Cyprus is now faced with.” Savvas Iacovides, a veteran Cypriot journalist, told Gatestone.

“This island country receives tens of thousands of illegal, economic immigrants from Asia and Africa. As the Cypriot Minister of Interior, Nicos Nouris, stated, ‘for us, this is a state of emergency’. The government of Cyprus notes that Turkey, which illegally occupies one third of our country, is exploiting immigration to change the demography of the island for political purposes.

“This illegal immigration crisis, largely connected to the illegal Turkish occupation of northern Cyprus, greatly affects the economy, the Cypriot society, and the security of the island. Although Frontex supports the efforts for the return and repatriation of illegal economic immigrants, that is not enough. Cyprus is inundated by thousands of these illegal immigrants. Many argue that the time has come when the Cypriot government should follow the example of Denmark, Poland, Greece or Hungary to stop this ongoing nightmare.”

Uzay Bulut, a Turkish journalist, is a Distinguished Senior Fellow at the Gatestone Institute.