Biden Is Not Fully in Charge 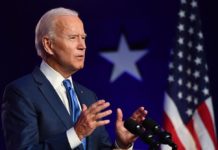 Who’s running the show in Washington on Ukraine? Why was Zelensky invited before Congress to appeal for the kind of help President Joe Biden had already ruled out, lest it lead to war with Russia? And why was Biden told to tell that reporter Putin is a “war criminal”?

Are the neocons getting desperate? The outlines of a deal to stop the fighting are already visible, including neutrality for Ukraine and no NATO membership. These need to be put down in writing. Other hurdles (Crimea, Donets, Lugansk) are not insuperable. First and foremost, a ceasefire is needed.

Instead of encouraging Zelensky to make a deal, the Victoria Nulands of this world (and her proteges like Gilbert and Sullivan — sorry, I mean Blinken (who writes the script) and Sullivan (who composes the music) are taking advantage of Zelensky’s formidable acting abilities, with the inevitable result that thousands more Ukrainians will die/be wounded unless a ceasefire comes soon.

The U.S. learned a bitter lesson from the Hungarian revolution in 1956, when Radio Free Europe encouraged unarmed Hungarians to fight off Soviet tanks (hinting that the U.S. would help) — in other words, encouraged them to fight till the last Hungarian. When the Soviets invaded Czechoslovakia in August 1968, my duties in Germany included liaison with Radio Free Europe to which I passed along guidance from Washington.

RFE management, although highly sympathetic to the Czechs and Slovaks, carefully avoided the kind of incendiary rhetoric used in 1956, thus sparing countless Czechs and Slovaks from becoming dead Davids before the tanks of the Goliath named Brezhnev.

I have not had time to closely monitor what kind of message RFE is giving Ukrainians these days but — not surprisingly — with RFE’s meretricious emphasis on Russia’s “unprovoked” invasion, I think it is a safe bet we are back to the example of 1956, this time fighting till the last Ukrainian.

We also touched on the role of the neo-Nazi Azov brigade; also the important role of China.

Please stay tuned for our next posting — Scott Ritter and I on The Critical Hour yesterday.

Ray McGovern: Biden Is Not Fully in Charge