Beyond Ukraine? The Madrid Strategic Concept and the future of NATO 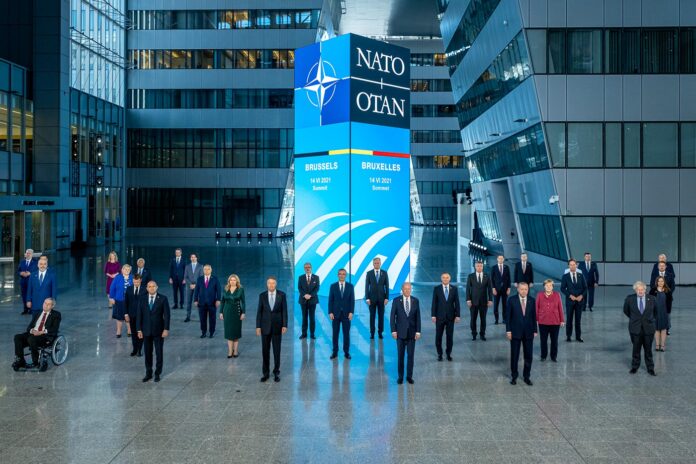 At the Brussels Summit in June 2021, NATO leaders agreed to begin work on a new Strategic Concept, which will be adopted at the upcoming Summit in Madrid in June 2022. The last such Concept was agreed back in 2010 when the world was a different place.

NATO’s Strategic Concept is meant to provide a diagnosis of a dynamic international security environment, identify the main threats and challenges to Euro-Atlantic security, and outline ways to address such challenges. It is meant, therefore, to inform NATO policies for years to come. Throughout the Cold War, NATO Strategic Concepts – which remained classified – lasted roughly a decade on average. When adopted, the Madrid strategic Concept will be NATO’s fourth since the end of the Cold War.

Initial discussions on the next Strategic Concept revolved around the need to prepare the Alliance for a world characterised by the return of inter-state threats and great power competition. This alone marked a sharp contrast with the Alliance’s post-Cold War focus on transnational challenges and non-peer competitors.

What would the return of great power competition entail for the evolving balance between NATO’s so-called three core tasks (i.e. collective defense, crisis management and cooperative security)? How should NATO balance a renewed focus on inter-state threats and great power competitors with the ongoing relevance of transnational threats and challenges, like terrorism or the climate-security nexus? When thinking about great power competition, how much emphasis should NATO put on Russia’s immediate threat to Europe, as opposed to the more systemic challenge represented by China’s strategic rise? And what should be the right balance between the military and non-military aspects of great power competition? The latter question becomes particularly relevant in light of the growing salience of “hybrid” forms of warfare and emerging disruptive technologies, which compel the Alliance to emphasise societal resilience at home and step up its efforts to innovate technologically.

The war in Ukraine – and ongoing debates about how the Alliance can assist Ukraine while strengthening deterrence in Eastern Europe – have become important topics in Strategic Concept discussions. In a way, the current war vindicates the view that we do indeed live in an increasingly competitive world, and that inter-state threats are back. On the other hand, the overt and direct nature of Russia’s invasion challenges some of the pervading assumptions about how future conflict was likely to unfold in indirect and hybrid ways.

Even though the Strategic Concept is meant to inform long-term strategy, the salience of the war in Ukraine and the fact that it is likely to reverberate for years to come, makes the crisis important when developing the Concept. That said, uncertainty as to the fate of Russia’s operations in Ukraine or how they may impinge on Russia’s power and strategic posture along the Eastern border of the Alliance, mean that any reflection on NATO’s strategy in the East will need to go beyond the Strategic Concept. More broadly, the Strategic Concept must look beyond immediate challenges in Europe and take stock of the broader shift in global power from the Euro-Atlantic to the Indo-Pacific.

The Strategic Concept from a historical perspective

The current NATO Strategic Concept, adopted in Lisbon in 2010, aims to strike a balance between the Alliance’s so-called three core tasks: collective defense, crisis management and cooperative security. In many ways, the Lisbon Strategic Concept draws on the previous one (adopted in Washington in 1999). It represents a crystallisation of NATO’s experience in the post-Cold War period, an era characterised by Western military-technological supremacy, and the seeming absence of peer competitors.

In the immediate post-Cold War period, the belief that former adversaries like Russia and even emerging great powers like China could somehow be integrated in the rules-based order was still widely held. This was a truly exceptional period. The power surplus enjoyed by the United States and its allies gave the West a free hand (both politically and militarily) to engage in ambitious out-of-area endeavours, and leverage crisis management operations and collective security initiatives to expand the remit of the so-called open and rules-based international order, not only in the broader Euro-Atlantic neighbourhood but also beyond.

During the long-post Cold War era, collective defense and deterrence took a back seat. Even though they constituted the fundamentals of Euro-Atlantic security, they were considered almost superfluous in light of Western military-technological supremacy. Crisis management and collective security ruled the day. But this world is gone and great power competition is back. That reality was illustrated by Russia’s annexations of South Ossetia, Abkhazia and Crimea in 2008 and 2014, and even more starkly by its invasion of Ukraine in February 2022. Also striking has been China’s strategic rise and growing assertiveness in East Asia and beyond.

Peer competitors are once again challenging security, and geopolitical and security architecture in the important regions of Europe and East Asia, but also the institutional and normative fabric that underpins the open, rules-based international order. Adapting the Alliance to this new wave of great power competition is arguably the main challenge in the coming decade.

In a world that no longer revolves around the Euro-Atlantic region, and is increasingly defined by China’s strategic rise and the growing centrality of the Indo-Pacific region, the Alliance will need to think more globally about security. To be sure, the Euro-Atlantic region will remain NATO’s direct referent. However, the future of that region – and that of NATO itself – will likely become increasingly affected by broader geostrategic dynamics to a degree and in ways that are unfamiliar to NATO and its member countries.

NATO must therefore adapt to a world in which the Euro-Atlantic region will remain important, but will probably become a secondary theatre in world politics, as well as in the context of US geostrategy. These changes should push the Alliance to develop a more global approach to security. Beyond the more specific question of whether NATO itself should act globally (e.g., by developing a presence in the Indo-Pacific region), the Allies ought to think more systematically about the main communicating vessels between Euro-Atlantic security and broader geostrategic dynamics, specifically the Indo-Pacific. Three stand out: the global implications of China’s rise; the evolution of the Sino-Russian relationship; and America’s need to prioritise between Europe and Asia, and what that may mean for NATO, European security and the longstanding debate about a transatlantic division of labour.

The war in Ukraine, and Allied efforts to assist Ukraine and to bolster deterrence in the East, seem to have led to a revival of the transatlantic relationship, and a renewed focus on Europe, including for the United States. Yet contrary to what one may instinctively think, the war in Ukraine is unlikely to alter the steady shift in the centre of global strategy and politics – or, for that matter, of US geostrategy – towards the Indo-Pacific region. Rather than halt a shift towards the Indo-Pacific, the Ukraine crisis and the response to it so far, provide a powerful illustration of how European geopolitical and security dynamics are increasingly affected by extra-European ones.

For one thing, China- and Asia-centric considerations have featured prominently in debates about how the United States should respond to Russia’s aggression in Europe. Some experts argue that the United States should avoid getting bogged down in a European war – lest this should distract its attention from the Indo-Pacific. Others have contended that a strong U.S. response will deter adversaries and reassure allies elsewhere, notably in the Indo-Pacific. As long as the security of Europe and the Indo-Pacific hinges largely on US power, and as long as these two regions continue to exercise significant pressure on US defense resources, their alliance and deterrence architectures will probably remain intertwined. This underscores the importance of greater political and military coordination between NATO and its key partners in the Asia-Pacific, namely Japan, Australia, the Republic of Korea and New Zealand.

For another thing, it is also important that NATO and its Asia-Pacific partners have a common picture on Russia and China, and how their relationship may evolve. Without ignoring existing frictions, if the Sino-Russia relationship remains broadly cooperative, attempts to drive a wedge between them may prove challenging. The broader point, however, is that whatever the United States and its European and Asia-Pacific allies think they can do in relation to engaging Russia or China, or manipulating their relationship, they must remain aligned. Otherwise, there is a risk they may draw different conclusions about either power’s trajectory or how their relationship may evolve, and thus frame their policies on the basis of different premises. This could conceivably trigger competition between the United States and its allies, and among NATO Allies themselves.

The war in Ukraine has become an important aspect in the debate about NATO’s forthcoming Strategic Concept. Discussions on how to continue to assist Ukraine and bolster deterrence along the Eastern part of the Alliance will no doubt take center stage in Madrid in June. This is understandable: deterring a war in Europe is what NATO was created for. In fact, when it comes to the main questions informing the debate on the Strategic Concept – i.e. the balance between the three core tasks; state vs. non-state threats; military vs. non-military; Russia vs. China, etc. – the war in Ukraine may make the pendulum swing closer to the former than many would have anticipated just prior to the invasion.

However, preparing the Alliance for a context increasingly defined by great power competition requires looking beyond the current crisis in Eastern Europe, and taking stock of broader geo-strategic developments. This is particularly important in light of the decreasing centrality of the Euro-Atlantic region in global strategic competition, and the fact that security dynamics in and around Europe will be progressively affected by extra-European developments. Critically, the Alliance will need to develop a more global approach to security, and more specifically a better understanding of geo-strategic developments in the Indo-Pacific region, and their likely implications for Euro-Atlantic security.