A Desperate Erdogan Cozies Up to Iran and Russia 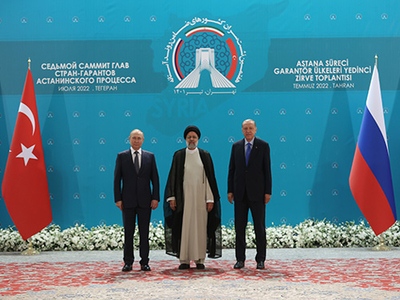 In July, for example, he traveled to Tehran to reach a number of agreements to secure gas and oil supplies, despite Western efforts to isolate Iran’s economy due to its nuclear weapons program. But in the previous month, Turkey helped thwart an Iranian plot to assassinate Israelis visiting Istanbul. Then in August, Erdogan restored full diplomatic relations with Israel – which Iran vows to destroy. Erdogan has severed those ties over the years following Israeli clashes with Palestinians and their supporters.

Elsewhere, drones produced in Turkey are helping Ukrainian forces fight off the invading Russian army. But Erdogan, whose country has been part of NATO since 1952, has agreed to buy sanctioned Russian oil by paying in rubles. And he seemed to blame Europe for the war when it sanctioned Russian oil exports, thus igniting a global energy crisis on.

“Europe’s attitude towards Mr. Putin, its sanctions, brought Mr. Putin – willingly or not – to the point of saying: ‘If you do this, I will do that,'” Erdogan said Sept. 6. “He [Putin] is using all his means and weapons. Natural gas, unfortunately, is one of them.”

Erdogan seems to have given up on creating an Ottoman-styled expansion in the Mediterranean, as per the Mavi-Vatan (blue-homeland) vision. Now he is trying to repair the damage caused in its pursuit.

While Turkey and Iran have been viewed as competitors, economic realities seem to be drawing them closer together. It might not be the dramatic shift many people see.

“Although economic mismanagement has indeed pushed Erdogan toward odd alliances and a desperate rush to repair relations with a number of countries, the truth is Turkey’s odd fellowship with Iran has been steadily growing even before the most recent crisis,” New York based lawyer and political commentator Irina Tsukerman told the Investigative Project on Terrorism.

Iran openly supported the Russian invasion of Ukraine by supplying military drones. This aid seems bizarre given the Russian reputation as a major arms producer and exporter, but the failure to attain its announced goals in Ukraine after six months left the Russians open to obtaining all forms of military supplies, including those from Iran and North Korea.

The deals between Iran and Turkey, meanwhile, were not just economic. Turkey approved the release of 19 imprisoned members of the Iran-backed Turkish Hizballah.

They were among 20 Turkish Hizballah members who received life-sentences in 2007 for killing 91 people between 1990 and 1994. They had targeted Kurdish civilians, but had an ultimate goal of toppling Turkey’s government and replacing it with an Islamic one.

“Strengthening relations with Turkey on any issue strengthens Iran’s position in the region as it creates a stronger front between countries which overall had complex relations and that the West claimed could be played off each other,” said Tsukerman.

“In reality, Erdogan has no interest in going back to a mostly pro-Western positioning, but [Turkey] cannot operate in isolation and in conflict with Iran either, given that Iran is in the nascent stages of a nuclear weapon production,” she added.

Playing both sides in the Ukraine war allowed Erdogan to broker a deal in July for the resumption of Ukrainian wheat exports that were blocked by the Russian invasion. The deal was hailed as a diplomatic victory, particularly by Turkish pro-government media.

Erdogan’s August visit to Russia, following his trip to Iran, indicates the economic despair that Turkey faces. While a private company connected to Erdogan’s son-in-law is supplying Ukraine with Bayraktar T52 armed drones, Turkey remains one of the few countries that didn’t impose economic sanctions on Russia following its invasion of Ukraine.

“The war in Ukraine and the growing distrust of Russia’s presence in the South Caucasus likewise has given Turkey both new opportunities for trade and cooperation and new leverage over Russia on certain issues,” said Tsukerman.

“The vulnerabilities of the Russian S-400 in the field in Ukraine have given Turkey pause over dependency on Russian weapons while the success of its Bayraktar had positioned Turkey as a growing new defense industry,” she added.

Erdogan is trying to break his country’s isolation following a decade of aggressive policies that left it economically battered and isolated.

Turkey supported the Islamist Muslim Brotherhood’s rule in Egypt and opposed the 2013 ouster of President Mohamed Morsi in the popular revolution in 2013. Egypt and Turkey also were on opposite sides of vicious military campaigns in Libya, Syria and Iraq. And Turkey has had other confrontations with Greece and Cyprus over naval borders and gas exploration rights in the Mediterranean.

Erdogan’s efforts to end Turkey’s isolation may be creating new problems. The United States raised the idea of sanctioning Turkey after a deal was announced to boost Turkish exports to Russia. The State Department warned Turkey not to “become a safe haven for illicit Russian assets or transactions.”

Turkish exports grew 46 percent in the past three months compared to last year, boosted by western sanctions on Russian exports.

The four hours meeting with Putin in Sochi, Russia resulted in a much needed economic and political boost where Turkish exports could find their way into a sanctioned Russian market. Erdogan’s approval ratings have slipped in Turkish polls less than a year before upcoming elections.

“This arrangement is most likely already ongoing in some capacity. Russia, Iran, and others have proven to be adept at circumventing international sanctions, and in particular, Russia stands to benefit the most from the lifting of any additional energy related sanctions on Iran,” said Tsukerman.

“Inspecting the movement of the oil through Iranian facilities is extremely complicated. Iran has been able to steal oil from Iraq for many years through vessels and other methods, without the international community being able to put a stop to it. Let’s not forget that Russia’s Gazprom signed an MOU with Iran and is set to develop a number of oil fields in Iran, which will facilitate the implementation of various smuggling schemes.”

Where the West is facing an energy crisis, Erdogan is attempting to turn this crisis into an opportunity while tossing away Western interests in the process.

“Turkey sees itself positioned with a significant opportunity to make choices and form issue-specific alliances rather than sticking to the same front on all defense, security, and economic concerns across the board,” Tsukerman said. This may signal the splintering of traditional blocs formed during the Cold War and the emergence of a new model of smaller, more local, and more fluid coalitions.”

IPT Senior Fellow Hany Ghoraba is an Egyptian writer, political and counter-terrorism analyst at Al Ahram Weekly, author of Egypt’s Arab Spring: The Long and Winding Road to Democracy and a regular contributor to the BBC.