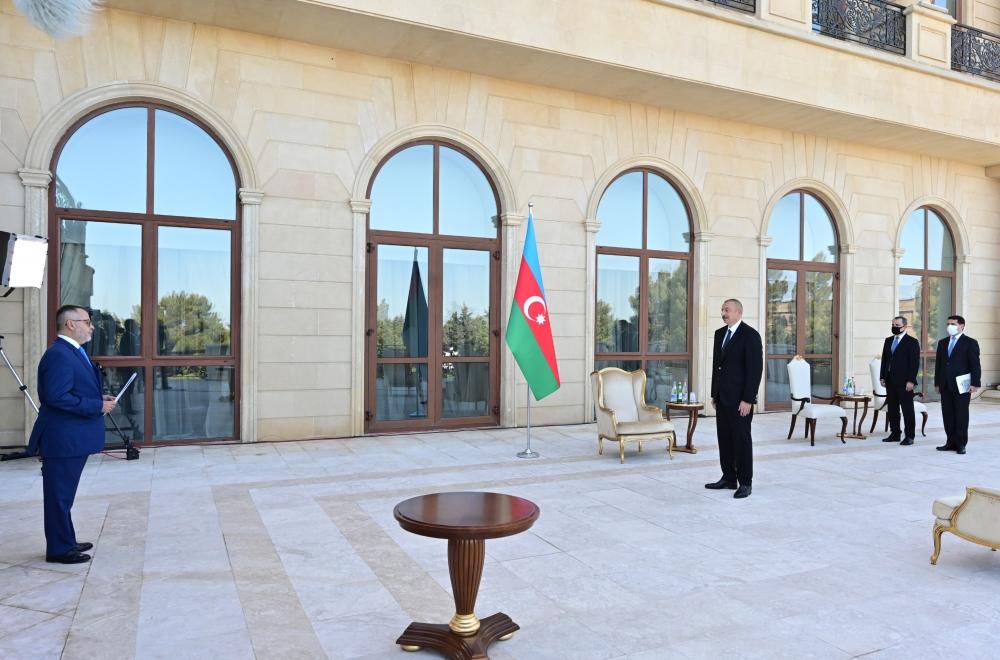 President Aliyev: Azerbaijan to support Turkey in any circumstances [UPDATE]

President Ilham Aliyev has voiced Azerbaijan’s support for Turkey over the recent tension between Turkey and Greece in the Eastern Mediterranean region.

Aliyev made the remarks while accepting the credentials of the newly appointed Ambassador Extraordinary and Plenipotentiary of Greece to Azerbaijan, Nikolaos Piperigos on September 2.

“It is no secret that Turkey is not only our friend and partner but also a brotherly country for us. Without any hesitation whatsoever, we support Turkey and will support it in any circumstances. We see the same support from our Turkish brothers. They support Azerbaijan on all issues, and we support them on all issues, including the issue of intelligence in the Eastern Mediterranean,” Aliyev said.

Addressing Nikolaos Piperigos , Aliyev said: “I want you to know our position. This position has already been officially announced by the Azerbaijani government on my instructions. I can tell you again that Turkey is not only a friend but a brotherly country for us. The Turks are our brothers. So we will be with them in all matters.”

Commenting on the Azerbaijan-Greece relations, President Aliyev said: “I want to find something positive to touch upon, but unfortunately I can’t find it. Perhaps we hope that the new government of Greece, which came to power relatively recently, will reconsider the policy of the previous government against Azerbaijan.”

The president said that Baku and Athens can restore contacts and discuss issues that create positive dynamics, adding that that will depend on the policy and position of the Greek government.

Speaking about the Nagorno-Karabakah conflict with Armenia, Aliyev reminded that Armenia has occupied Azerbaijani territory and this is reflected in the documents of all international organizations.

“We are concerned about this tripartite format of cooperation. Of course, every country does what it thinks is right. Therefore, we are not in a position to block or prevent it in any way. But I think that it would be good if you hear from me that this is an issue that worries us, and I have explained why it happened,” Aliyev noted.

“As you know, Armenia is a country that has occupied our territories. It has committed an act of genocide in Khojaly, expelled one million Azerbaijanis from their homes, destroyed our historical, cultural and religious monuments, implemented a policy of ethnic cleansing in the occupied territories, is violating international law and does not comply with the resolutions of the UN Security Council and other organizations.”

Aliyev recalled that two years ago, the European Union and Azerbaijan initiated a document called “Partnership Priorities” in which the European Union supported the territorial integrity, sovereignty and inviolability of Azerbaijan’s internationally recognized borders.

“Armenia is acting aggressively. The latest tensions on the state border are a provocation by Armenia. An Armenian officer was recently detained while trying to cross the line of contact in an attempt to commit a terrorist act, and he has already admitted that his group intended to attack our servicemen and civilians. In short, Armenia is the enemy of Azerbaijan, and this was their decision,” Aliyev emphasized.

The president stressed that Armenia’s close military cooperation with any country is a matter of concern for Azerbaijan.

“You are probably aware of our reaction to the intense supply of weaponry from Russia to Armenia immediately after Armenia’s provocation on the border. Active clashes were suspended on 16 July, and from 17 July until yesterday – yesterday was the last flight – there were numerous cargo flights from Russia to Armenia through the airspace of Caspian littoral states. I am saying this to you for a reason. We have also raised this issue with our Russian partners, and we are concerned about military cooperation with Armenia.”

Aliyev stressed that this poses a major threat to Azerbaijan Armenia is using these weapons to kill Azerbaijani servicemen and civilians.